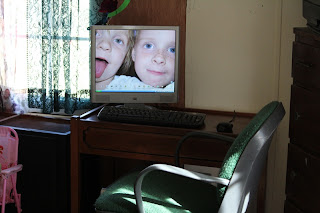 Special kids now have their own computer.  They will get to see it next weekend.  I was going to get them yesterday, but Jk did not answer her phone and then the newputer came in, so I decided to wait till next weekend to get them.  This is in the back bedroom which I always call their room.  The chair is the one Sammy gave me.  I really like it but George would rather use the one we have and he is the one that uses the computer desk most of the time, so I really did not have a place for this chair.  Now I do.  They also have their little chairs they can use if they want instead of this one.  I think they are going to get a kick out of having their own computer, but they probably won't use it much. They can use it to watch their DVD movies .  Our only DVD player is in our bedroom and it is a pain to use because you have to switch the imput on the TV and you have to use 3 remotes, the Satalite, the TV and the DVD.  I know, the one remote should work for all, but I can't even get it to work the TV let along the DVD. 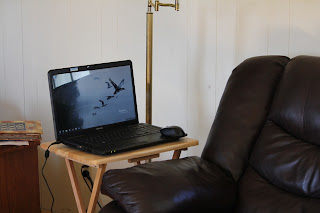 This is my new computer, and this is where I like to use it.  It was very simple and easy to set up and get to working with our internet.  I have had trouble finding a simple image editor to resize the images.  I like to resize images before posting but have not downloaded my new Office software yet.  I will probably do that tomorrow.  It is a newer version than on the HP laptop so I am not sure the image editor is still included.  I found a free simple one to download and it works fine.  I tried the one that came with my camera and it did a few edit things, but no resize.  I have Paint Shop pro, but I do not like it for simple things because it does not default to jpeg format and you cannot get it to change the default.  It is good for complex editing, but a pain to use for simple resizing. 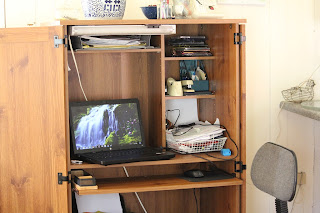 This is George's 'new' laptop.  One of the main drawbacks to the older computer is it does not have WIFI so we had to keep moving the internet device between the two computers.  Now, with two laptops we are both on the net at the same time now.  It is working smoothly so far.  I think I am going to like this much better.  And, with his laptop set up at the desk, I think George will like it better.  The old computer had gotten to be a real pain to use on the net.  It just crawled along when compared to the laptop.

And, for the trying part of the day.  I decide to change satellite  TV companies.  But changed my mind after talking with them for a while.  They said I could not cancel.  I think they thought I would give up if they just kept stonewalling.  They should have talked with Best Buy.  Anyway, we still have the same company and Monday I will call my card company to make sure I do not get charged.  I told them if they tried to place a charge on my card I would call the state attorney general.  I bet they thought that was and idle threat.  It was not.  I may have search the web for Direct TV CEO.  For now I am going to watch a movie on Dish and then go to bed.

Winnie has a camper at Bennett Springs and a storm swept thru there Tuesday night, the same night Branson was hit.  I emailed her and she said their camper and property made it thru the storm without damage.  I think many campers in the park were destroyed.

I guess we will be in for another stormy spring and it is coming earlier this year.
Posted by Sister--Fleta at 10:28 PM 1 comment:

I got the new computer.  It is a Toshiba 17.3 with a full keyboard.  It is up an running.  I have to move George's big computer to the back bedroom and set the HP laptop up where his computer is so he can play cards.  He uses the computer on the net some, but he usually spends at least an hour or so each day playing solitaire.  He does not like the laptop as well for playing cards as the big computer, but for net work, the old computer is way way slow.

It started out almost 70 today but has gotten colder and windy as the day goes along. It is less than 50 degrees now.

Sixty One, or First Day of March 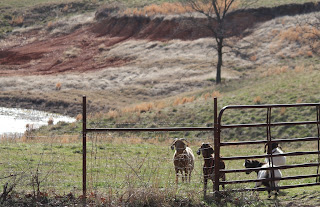 One of the goats showing her best side.  It was 75 here today.  Trees are all blooming out including my peach tree.  Probably means no peaches again this year. 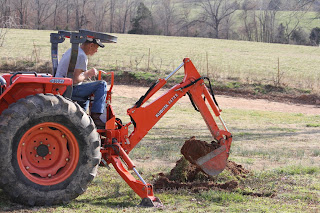 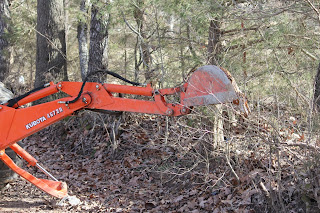 Here getting a tree to disguise his intentions. 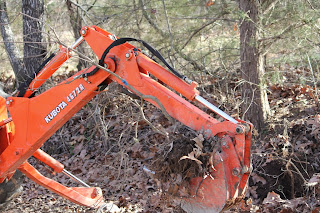 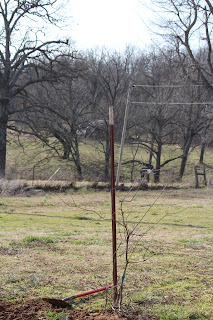 Dogwood tree planted to hide the spot.  It is close enough to the house that I can water it easily and he will not have far to drag me if he follows through with his original intents. 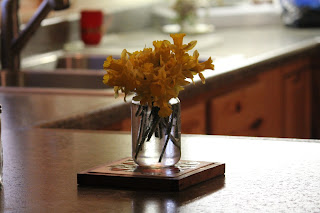 Replenished cut flowers.  I only have about 1 more cutting of yellow blooms and they will be all gone.  I saw a bunch up the road growing along the side of the road that were just full of blooms.  I guess I can stop on the way home from work and visit. 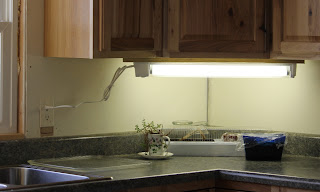 I have decided to have a kitchen herb garden in the corner of my kitchen.  I planted seeds Sunday and some are already coming up, so today George put up the grow light.  I will put them in pretty pots after the grow for a month or so.  I planted chives, lavender, thyme and basil.  I am going to order some purple basil seeds later on.  That is really why I want to try this.  I looked all over last year for purple basil and purple sage plants and could not find them.  I found a place to order all kinds of herb plants or seeds up by KC that are reasonably priced.  I will wait a few weeks to order.  If I order plants instead of seeds, I will have to wait till April. 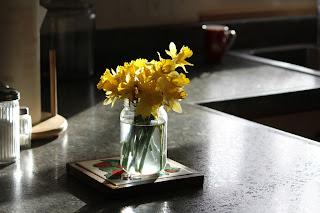 It was a really gorgeous day. Almost 70 degrees.  We went to the VA today and George had a MRI for his arteries.  By the time we got home, they had already called and said everything was normal.

There are a few deer over on the ridge by Clayton's tonight.  They do not like all the cows.  Two more work days. 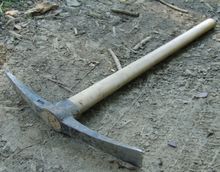 Helen, this is a Pickax.  The pick and ax end are each about 10 inches long. 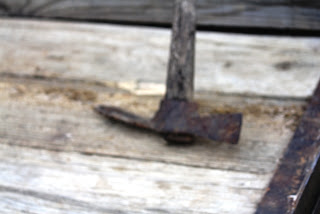 This is my grubbing hoe.  The whole hoe part is only about 10 inches or so long from end to end.  Sometimes a pick is like the first picture, except both ends are pointed instead of one being ax shaped. 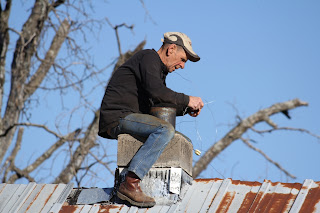 This was George stringing wire for the electric fence Sunday.  I don't think the cow can get up this high anyway. 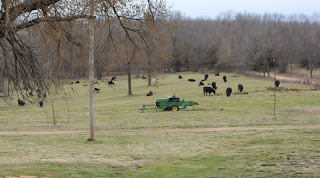 Here are the pretty black cows and a few calves in the pasture today.

I know Tony is not quite fifty seven.  That was supposed to be the day, but since I had skipped a day Sunday, I had he day wrong.  Now it says Fifty Eight, and I know Tony is not fifty eight either.  I need a Julian calendar on the other side of my blog so I can keep up with the day numbers.

Yesterday and today were nice days, up in the 60's but a little windy.  They say we may have storms tonight,.  One of my peach trees and the nectarine are blooming.  They will probably get bit again.  Last year I did not have any peaches and only a couple of apples. 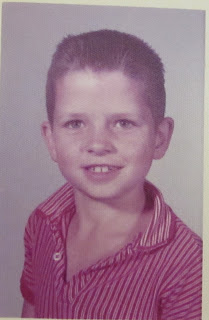 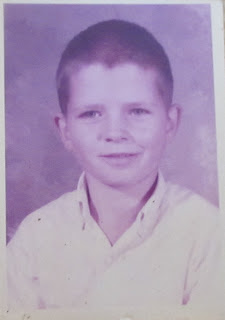 Or, Kelly-Ton.  He is way old today.  His Mama said he was crying because no one had called him on his big day.  His number is 480-9065.  Everyone needs to call him and sing Happy Birthday to Tony.