Patsy says I was wrong about the new pope.  I say I was right, he looks much like the one that quit last month.  I think, in world of things that matter in the world, this did  not much matter to the world. 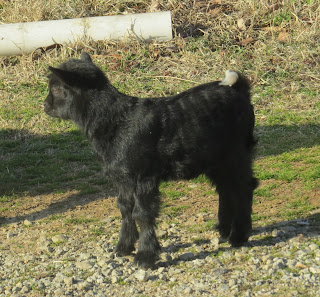 Little Black Jack is looking pretty.  Big white nanny should be having some cousins for him to play with before many more weeks.

George's billy brought $70.  Patsy said if we decide we need to thin our herd, we can take them to the sale.  I thought we might have to take them to a vet and get vaccines or tests before we could sell them, but she says no.  Everything is taken care of at the sale barn.  That is probably where Black Jack will end up some day.

Today was still really cool.  It is supposed to be warmer tomorrow and in the 70's Friday, then cooler again Saturday.

If we get nice weather the next weekend, after this one,  we may try to go float the Buffalo.  We have wanted to do that for several years, but we always wait till it is latter in the Spring and the water gets too low to float the first part of the river.  The first part is the fun part for us old folks just looking for and easy day.

Did I say I am ready for Spring?

Spring is on the way.  A couple more days and weatherman says it will be in the 70's here. 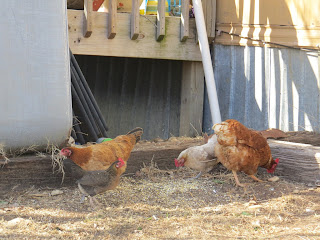 Birds in the yard 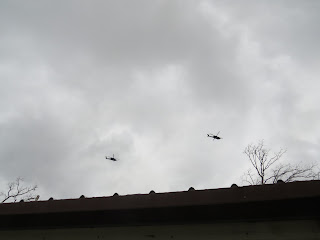 And birds overhead.  These birds have flown over our house the last two Sunday's.   No shots were fired. 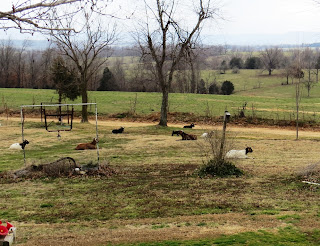 Fleta might sell something that does not belong to her, but George never would.  George has always been the ban of the criminal nature in our family for me and our boys.  I told him all week he had to take the billy home.  Instead of doing like I would have and just drove over there with the billy, he called.  They wanted him to take it to Huntsville to the sale.  I would have still just taken it home, but he does not know how to say, no, I don't want to do that.  His idea was that he would call back and have JT meet him and take the billy to Huntsville.  When he called JT was in the hospital.  So, hubby drove all the way to Huntsville with the billy thinking he could just say it is JT's billy. I knew that would  not work.  When he gets the check for the billy, I know he will drive over to their place and deliver the entire amount of the check.  He will probably spend more on gas in the two trips than they make on the sale.  He is way nicer than I am, and more honest too.  But, I know you all knew that already.

It quit raining and the sun came out for a couple of hours. Now it is mist from horizon to horizon.
Posted by Sister--Fleta at 3:54 PM 1 comment:


One old time group of old men are going to vote for a new sainted dictator this week.  I predict, in spite of all the media hoopla, they will elect an old man that looks and acts very much like the old man that quit on them last month.  That he, he will be an old white central European male, not from another continent, not a different color and not from a younger generation.

George took the borrowed billy to the sale at Huntsville Saturday.  He saw Sammy there, but he did not stay to watch the sale.  We will find out how much the billy sold for, because he had to sell him under his own name.  He seemed to think, somehow, he could use JT's name on the sale, even though JT was not with him.  That was not to be.

Oh, and we got our money back from Uncle this week.  All of it.  I have been filing my own taxes for forty-seven years. No one other than me has ever filed my tax return in all that time.  This is the first year I have not had to pay Federal income taxes.  I was a little surprised at that.  If I was not still contributing some of my income to a retirement fund, I will have had to pay a few $$ in taxes, but not much. Next year I will not get so much back, because the day after I filed I went to HR and changed my W4 so they only take about $5 out of each check.  Next year, if I get it all back again, I will go to zero.  I don't want to take it so low I have to pay when I file. 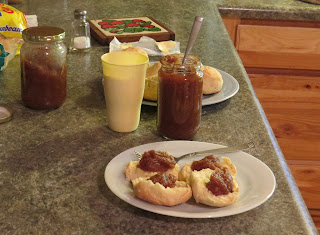 I had 3 big apples that were too sharp for eating apples so I made Helen's Apple Butter this morning. It was good on the biscuits I made.  I used my homemade yogurt to make the biscuits. The yogurt was easy to make, but tasted a little salty and a little bitter.  I have been using it for cooking.  I will not try to make it again as it is not worth the trouble to me.  The apple butter turned out very good, tho.  I will take one jar to work to share and keep one for me.  No one else here will eat it.

We are having crockpot beans for supper.  I guess I will make cornbread and maybe fried potatoes to go with them.

Did I mention that it is raining?