When I set the world on fire

First Sister
This afternoon, I went to Wal-Mart to buy groceries after work. When I came out of the store, there was smoke everywhere. There had to be a big fire somewhere. All the way home, 15 miles or more, the smoke kept getting wrose. I was wondering if brother had set the hills afire again. On the news, they told the smoke was from a 'controlled burn' in the national forest south of here. Maybe is was not so controlled as the smoke was thick for over 100 miles away.

I have set my house on fire twice. The first time Greg was here and we got it put out rather quickly. The second time, I had to call brother from up the road and the fire department. I was not so scared that I would burn my own home down as I was that I would burn all the neighbors houses, barns and chicken houses across the hill. As brother and I battled the raging blazes, Mother watched from her back window. She got overly excited and somehow fell and hit her head. Then she could not get herself off the floor. She had to call Old Brother to come help her. Poor brother found Mother lying on the floor bleeding and his sister trying to burn the place down. Finally, the fire department got here and put out the fire. We kept it in the family tho. Niece Chery's husband drove the fire truck out here. He was probably the only one on the fire department that knew where we lived. They arrived just in time. The underpinning of the house was smoldering in several places. I am now not allowed to burn.
Posted by Sister--Fleta at 10:16 PM 6 comments:

I was going to put up a photo of the recliner Jackie and I recovered this weekend, but decided I like this pic better. I just can't get over how much he looks like grandma.

The Kids clearing a place for a chcken pen 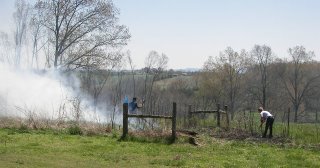 My kids, Greg and Jackie, clearing the area they are going to build a chicken pen for the chickens Patsy is giving them. Jackie is going to pen up her chickens and gether eggs so she does not have to buy eggs in town. She will not have show chickens like Mom. They are supposed to start on the chicken house today, but I have not heard any hammering for that direction. I think they may be following the Lords directions and taking a day of rest. 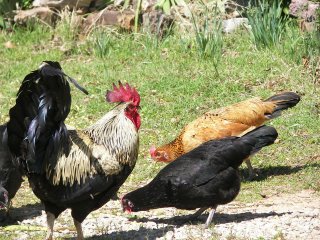 I have one yellow hen, gift from brother in spring of 2004; one reddish yellow hen, daughter of Old Yellar, born spring 2005; 2 black and one white-black speckled pullets from red-yellar born fall 2005; One rooster that wondered down from brothers place in summer 2004. They room free and take their chances with the varmits from the Rock Quary. Last year we had many chicks, but only these 4 survived. Curently Whitey is setting on a clutch of eggs. Maybe we will have baby chicks and maybe the varmits will have a feast. Our chickens are show chickens, ie for show only, as we do not bother to even try to find their eggs. I buy eggs in town and let the chickens do as they please. 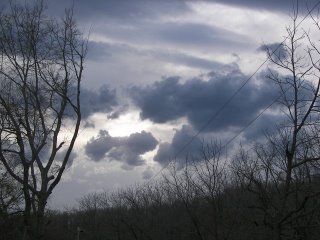 It looks so peaceful, but later in the night, these clouds brought rumbling stroms throughout the mid-section of our country.

Posted by Sister--Fleta at 9:37 AM No comments: 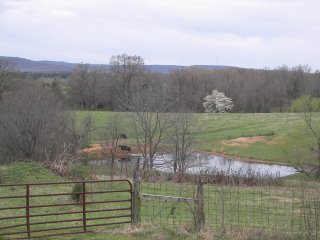 I now live on a 50 acre slice of land in the Qzark hills of northwest Arkansas that was part of the farm my father bought in 1945 when he came home from WWII.

When we were growing up here, we has several things that were THE. There was The walnut tree out at the corner which is no more, The little pond that is no more, The Rock Quary which is still overrun with varmits, and THE dogwood tree which still looks just as it did when I was a child.