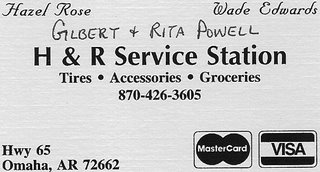 This is Gilbert's store number. One of the Sisters needs to call him and say you are down on Sand Flat Road and you need him to bring you a bucket of water! You will have to wait til next week tho. They are not open on Sunday.
Posted by Sister--Fleta at 6:26 PM 6 comments: 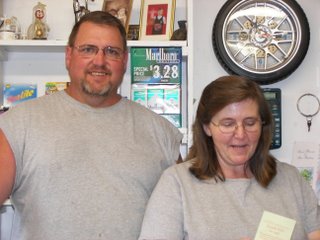 This is my brother Gilbert and his wife Rita in their little store in Omaha, Arkansas. Their's is a small town, very small pouplation 134 town, convience store, gas station, tire shop. In the small town tradtion, Gilbert makes many road trips, 10, 15 even 20 miles, out into the countryside to change a flat tires for his customers and they do much business on credit. Not credit card credit like the big stores, but personal credit where purchases are tallied on a running bill and the customer comes in on payday with his paycheck. Rita cashes the pay check, keeping what the customer has run up on his 'tab' and gives the remainder to the customer.

This week, Gilbert was visited by the local policeman. Earlier in the day, he had answered the phone at the store to a very angry woman. It took a while to get the gist of her story. It seems she lives out on Sand Flat Road over by Alpena, 20 miles or so from Omaha, but, somehow, the source of her water is the same as the town of Omaha and she was having water problems. Seems a large construction company was daily drawing down the water, leaving her with limited water pressure. She was going to call the EPA and the Police to get a boil order started. Gilbert told her several times, he could not help her and she needed to call Omaha City Hall, which is next door to his store. She said she had tried that and no one answered the phone there. She called someone else and they gave her Gilbert's number. After going round in circles several minutes, with three customes waiting to cash their pay checks and pay their bills, Gilbert told her he did not care and hung up.

Only in Arkansas do you get a visit by the home town police because you were rude to someone who called you because you happened to be next door to city hall. But, Gilbert is true to his raising. He did not care!

Robert and his Aunt Elizabeth 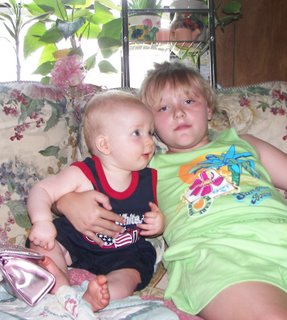 The boy was here over the weekend. With him is his Aunt Elizabeth, Jackie's little sister. He thinks she is great fun.
Posted by Sister--Fleta at 7:39 PM 2 comments:

The baby bluebirds left the nest yesterday. First, each one perched in the nest opening, while Mom and Dad called encouragement from a nearby tree branch. Then, one at a time, they took their first flight. They landed on the ground, on a tree trunk, on a tree branch, and high up on the side of an electrical pole. Mom and Dad are already looking to build a new nest in a nearby house.

Double click the photo for a better, closeup view.
Posted by Sister--Fleta at 5:00 PM 2 comments: