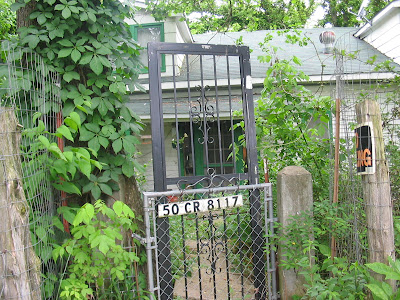 When we lived at Denver right across the big ditch in back of the house was the Carpenter house. Two old maids lived there , one was named Babe Carpenter, they had these two fiste black and white dogs.
They barked a lot on their own but Richard would go by the house and poke sticks at the dogs and they would go crazy.
The Carpenter woman complained about us bothering their dogs but that didn't stop Richard. The ladies were related to mama some how. the house is still there and the fence is in place but the dogs and the Carpenter ladies have gone to their reward.
Posted by Sister--Fleta at 8:26 PM 1 comment: 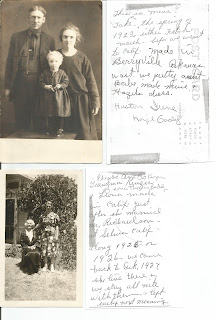 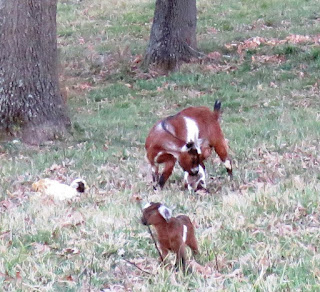 Patches had three babies.  The brown one is a billy, other two nannies.  She had them just before dark, just like Little Red.  Our herd is now 16. 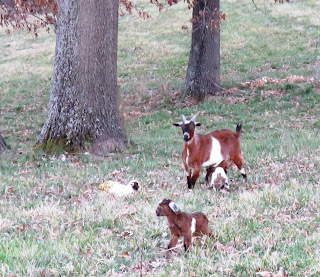 The billy is going to be Jimmy Johnson.  If we get a good looking billy with white body and brown head we will keep him, so we are saving the Jeff Gordon name for the keeper.

I noticed she was missing about 5 o'clock and Hannah and I took the wheeler looking for her.  We did not find her then, but I made another round and found her with two babies.  I thought I would bring t hem to the house but she would not follow.  I finally realized she had another baby that I thought was dead, but it just had not gotten up yet.  I left them along, but later George thought we should go get them.  He took the tractor down and hauled them in the bucket, but lost the Mama in the process.  We found her with the others on the  hill right behind the house here.  I put the babies in the pen in front of the old chicken house up here just a little ways from her.  In about an hour I am going to go see if she came to them.  If not, I am going to try to take them to her.  The last one born has been standing, but is a little weaker than the other two.  My theory is you should just leave them alone, and I think we should have just left her in the field where she was.  George thought the coyotes might bother her. The Billy looks just like her.

John Charles Powell, 78, of Green Forest, AR departed this life Thursday, March 3, 2016. He was born April 9, 1937 in Green Forest, the son of Jesse and Una (Coxsey) Powell. He graduated from Green Forest High School and was a U.S. Army Veteran.
John was always a farmer at heart and owned and operated several farming operations over the years. He was also a truck driver and enjoyed traveling, elk hunting and telling stories about his adventures. He especially enjoyed his role as a father and grandfather. John was a member of Bethel Baptist Church in Green Forest.
He is survived by his son, Randall Powell and wife Venus of Green Forest, daughter, Cheryl Johnson and husband Todd of Van Buren, Randall and Cheryl’s mother, Carole Powell of Green Forest, 3 grandsons, Johnathan Powell of Bella Vista, Alexander Johnson and wife Julianna of Ft Smith, Parker Johnson of Van Buren, 1 brother, Buster Powell of Green Forest, 1 sister, Francis Blanchett of Hot Springs, AR and a number of other family members and a host of friends.
He is preceded in death by his parents, Jesse and Una Powell, brothers, Vernon, Gene, Clinton, R T and D K Powell, sisters, Carmen Barrows, Mary Kathryn Brannick, Mattie Lee Powell and Barbara Mote.
Celebration Of Life service will be 10:00 AM, Monday March 7, 2016 at Smith Family Funeral Home in Green Forest with Pastor Joe Summers officiating. Interment will follow at Pickens cemetery. Visitation will be 2-4 PM Sunday, March 6th at the funeral home.
Memorials may be made to American Alzheimer’s Association...alzfdn.org
On line condolences may be made at www.smithfamilyfuneralhome.net

Robert, I am sick and tired of getting Hannah's drinks of water.
Grandpa, Tell her to get her own drinks.
Robert, She can't because she hurt her dumb pinkey finger.
Posted by Sister--Fleta at 7:24 PM 1 comment:

The sisters have several websites hosted by Rootsweb, Ancestry.com's personal family roots arm.  Betty noted today it has been down for sometime.  I did not know this as I have not been looking for dead people lately.  Sure nuff rootsweb is dead for now.  There is notice on their 'home' page noting the problem.


We're currently experiencing a temporary website outage due to Rootsweb hardware failure. Rest assured, our development and web operations teams are busy working to securely restore the site as quickly as possible.
Our initial expectation is to have the site back up and running on or around March 15, 2016.
We apologize for the disruption and thank-you for your patience. We will provide other updates here as we have them.

If it does get back up, I guess I need to make sure I have backups of all our roots pages.  I have changed computers so often, I am not sure I still have it all on my computer.

Tonight I notice our CCHS website is working.  Maybe the others will be up soon.
Posted by Sister--Fleta at 6:04 PM No comments: 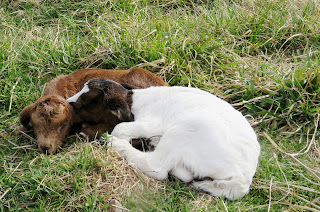 Both girls.  The first pair of girls we have ever had.  Before it has always been a nanny and a billy. 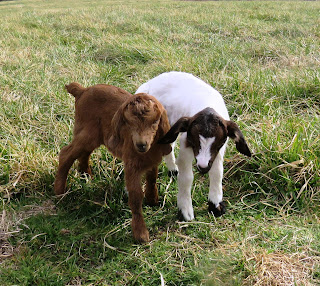 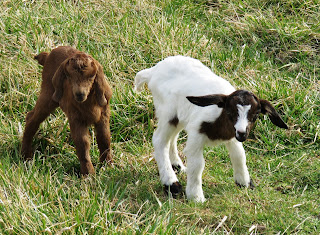 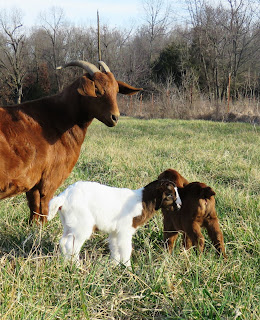 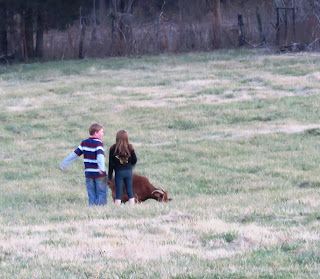 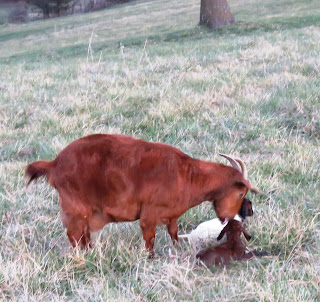 Robert says it is a miracle.  And, I have something to tell my teacher tomorrow.  I guess so.  They actually saw the last one being born.  Life on the farm. 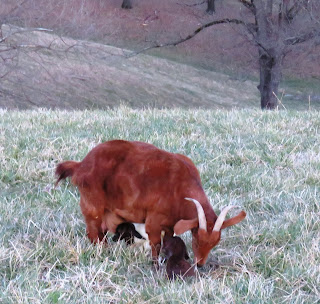 The white one was up and trying to eat.  The brown one had not stood up yet, but I elected to leave them alone.  Mama knows what to do.  I did not even check to see if we have boys or girls.  Maybe one of each.  Hannah wants to name them now, but I said we need to know if we need boy or girl names.  She said name the white with brown head chocolate milk and it could be boy or girl.  Robert says Jeff Gordon for the dark one.  If it is a girl, I don't think that will work. 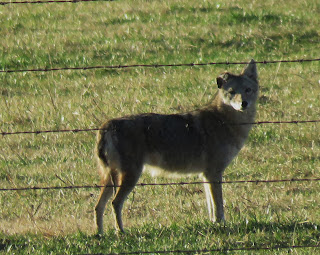 Well,this is none of those things.  It is a coyote I saw in Dan's pasture Sunday morning on my walk. 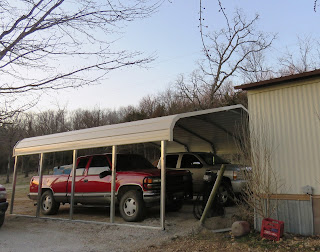 This is the carport we got last Wednesday.  I really like it. 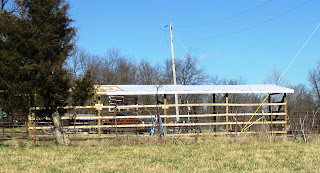 This is the goat barn with 9 sheets of tin on the roof.  It was cold and rainy today, so George did not get any more done. With a couple of sunny days, he should be able to the the roof finished and start on the sides.

Today, he got new tires for my truck.  He has bought new shocks, but does not have them on yet. 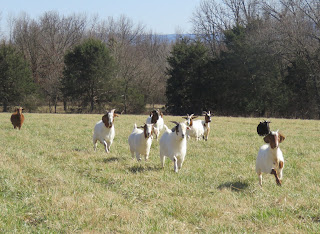 This is the goats running to me thinking I am going to feed them, when all I was doing was trying to get a vantage point for the goat barn roof. 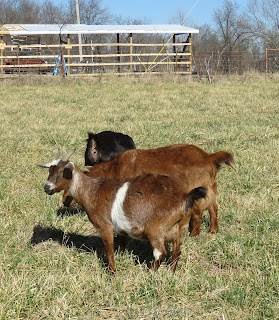 These are the three nannies that will kid in the next few weeks. 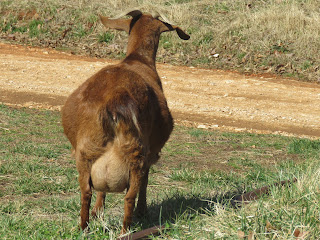 Little Red is within a few days of kidding. 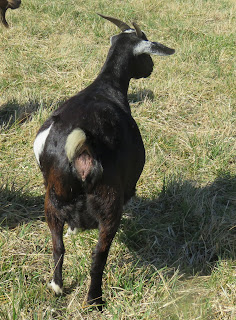 Boots will be another couple of weeks. 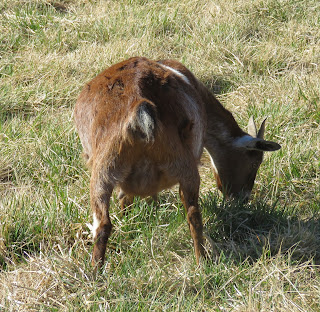 And Patches about the same.

I am anxious to have new babies.

The oven on my cook stove is not working.  Gilbert says it is the igniter and he is going to order a part and fix it.  I was going to try to buy a new stove, but that is a big shore.  He also brought Helen a new to her cook stove and refrigerator.  He had to take the fan off her old fridge and put it on the replacement, but now it works fine.  She is trying to bake bread in the new oven now to test it out.  They both look much better than what she had.

She has been sick, but she went to the dr today and got drugs.  Hopefully she will be better soon. Everyone who went to Church with me Sunday has been sick all week.  There must be a moral there somewhere. 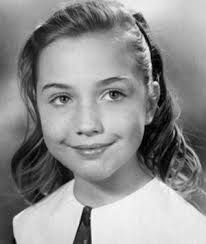 I have been at a loss as to why the non-trumper did not decide on one candidate and get rid of the others.  I now think it is because they know if it is one on one, he will win.   I believe the faithful think widening the spread by keeping all the cards in the race till the last dog dies they can bring on a brokered convention.  If it goes for broke, Trump will not be their nominee.